I remember coming to Drake University in 2015. I was a doe-eyed freshman, ready to learn and go out in the world on my own. When I talked to faculty, they told me I was welcomed with open arms. “Everyone is friends here,” one student told me. “Drake is a community, not just a school,” another one said. While I was somewhat skeptical of claims like this, I came into Drake feeling as if I was invincible. I couldn’t be stopped, I had a plan to be open and welcoming to everyone I met. I inserted myself into the freshmen friend groups that everyone had—having dinner in Hubbell together and hanging out in each other’s rooms until 2 a.m. on weekends. I felt like I belonged, or so I thought.

I was in a friend’s dorm room when we started talking about hair. All of the white girls asked me how many times I washed my hair. As a black woman, I don’t wash it every day, and I told them the truth about it. They looked at me with surprise and disgust in their eyes—I then knew I was trapped. They proceeded to ask me what my hair looked like wet, if it was nappy. One went as far as to ask to watch me wash my hair, “to see how black girls do it.” I firmly said no, despite my desire for these people to accept me. I laughed it off, went to my room, and worried about why my hair wasn’t as long and straight as theirs. I never brought it up in conversation with them again.

My sophomore year, Donald Trump was elected. All students of color felt that there was no safe place for us, but many white students couldn’t understand why we were so scared—even those who didn’t support Trump. I constantly talked (more like debated) with white students and staff that the culture at Drake had shifted. Racist and ignorant remarks were always made on campus, but with a man elected into office who openly supported hate speech and bigotry, white students became even more comfortable with making ignorant and racist remarks than they already were. They grew more complacent with the idea of attacking students of color because they know they wouldn’t get caught. Those who voted for him would tell me, “I mean I see where you’re coming from, but fiscally I support him.” His presidential win took a heavy toll on me. On election night, Democratic white students went home feeling defeated, Republican students went home gleeful, and students of color felt like they couldn’t walk home alone. I tried to tell myself that because of students speaking out about the hate crime that ensued during the election, that there could possibly be change. “We may become better,” I told myself. I was wrong.

My junior year, I was reminded that white men on this campus fetishize me simply for being a black woman. I can’t count how many times men told me “I usually don’t like the dark ones,” or “I love interracial porn.” I’ve heard insensitive comments like these so many times. I grew numb responding to them, usually shaking my head and walking away. When I see men on campus and at college parties, I go over three points in my head before starting a conversation with them: First, does he like me for me? Second, is he intimidated by me? And finally, does he just want to sleep with a black girl? They usually fail at one or all of the factors and I am reminded, like so many other women on campus, that I am a black woman struggling to make it at a PWI (predominantly white institution). I have other stories, but I cannot speak too much on this subject, it hurts too much.

A hate crime happened on campus recently. A student of color received a note containing racial slurs, threatening the lives of the students of color here on campus. Just like all the other hate crimes, it struck me to my core. I went back to that feeling from freshman year, like I was defeated, like I couldn’t do anything to stop them. Even as I type this, I learned that another hate crime has just happened on my campus. This too was a racist note delivered to a student of color living in the dorms. As I am writing my words to advocate and raise awareness for change, someone out there was trying to instill fear into the students of color here. After finding out about the note, I silently cried for a minute or two in the corner of our student union. I took a few deep breaths, looked up, and realized I was the only person visibly affected by the latest incident. I looked around and saw students continue to do their homework, talk, and laugh amongst their friends, simply going about their night. 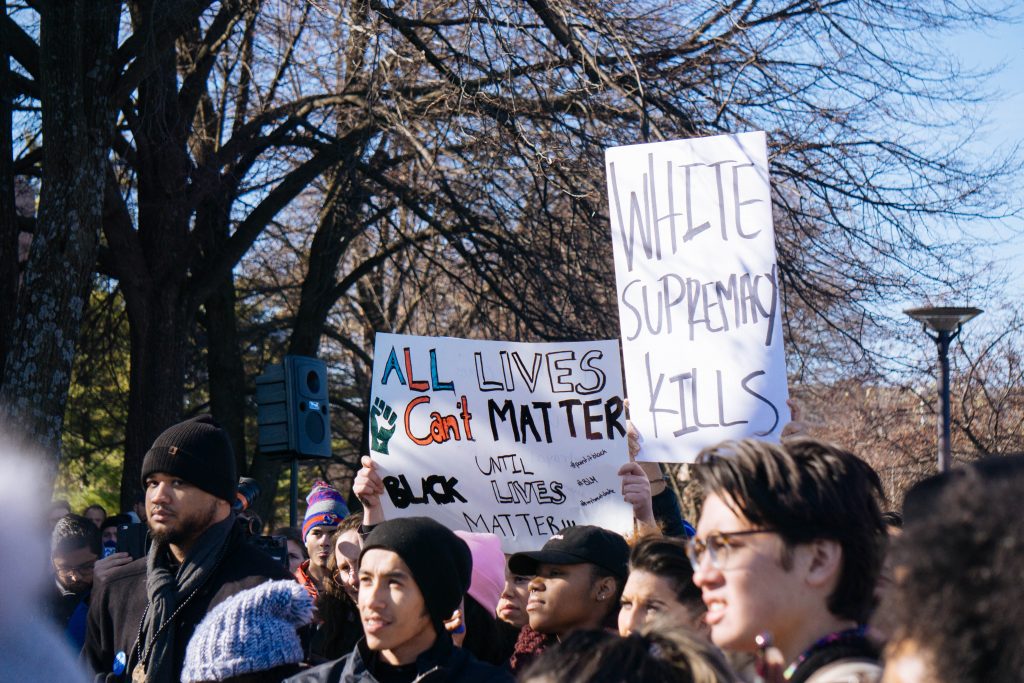 This is the issue at Drake. I can no longer let things slip under the rug, can no longer not call others out. I have to keep pushing. Not enough of those in the Drake community actively care about us students of color’s well-being. While there are those at this school that are active allies and stand with us, everyone should be an active ally. Everyone should be affected in some way by the two recent hate crimes that have happened, as well as by the white supremacist robo-call that targeted Drake students and faculty. All in one week. Wake up, Drake University. Be there for students of color, especially for those you don’t know, because we matter. Make us feel important. Do not tell us that our feelings on ignorant remarks made every day on this campus are invalid. Speak up when you hear bigotry and hate speech in action, especially when no students of color are around. It is not enough to be loud when we are there but silent when we are not.

Be the allies you claim to be.