Historic Valley Junction in West Des Moines, Iowa, boasts many unique shops and small businesses. One Valley Junction coffee roasting business, in particular, has been growing in popularity due to its unique charm and friendly owner. 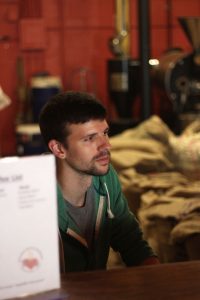 Corazon Coffee Roasters is the only organic, fair trade roasting company in the Des Moines area. The owner and sole worker behind the operation is Nate Peterson, whose passion for coffee budded just a little over a year ago when Corazon Coffee’s previous owner offered him the shop.

Before taking over the small coffee roasting shop, Peterson worked a desk job for an insurance company in Des Moines, where he felt stuck in his position. “I liked the job. I was good at it, and I liked the people I worked with, but I just couldn’t see it going anywhere,” he says.

So when Corazon Coffee’s previous owner offered Peterson the business, he saw a new path in front of him. “This is an opportunity to take over a coffee roasting shop that probably won’t ever happen again,” he says. “I can take it and make it my own and grow from there.”

Peterson took over the shop last September after Corazon Coffee’s previous owner took a job in Oregon. Peterson received several months’ training to ensure that the coffee roasting process would not change with the change in ownership and cause the beans to lose their signature flavor.

Since he took over, customers have been responding positively to the coffee he produces, and Peterson has been working to improve the coffee blends further. “A lot of people have said there are a few roasts that I’ve tweaked that they actually like better,” he says. “I’ve been able to keep the quality high and maybe even raise the bar a little bit.” 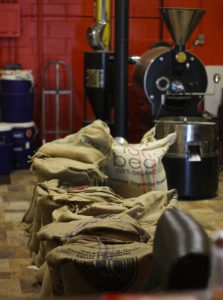 Peterson receives coffee beans from farmers all over the world, including Peru, Colombia, Mexico, Ethiopia, and Indonesia. He roasts the beans in a large gas-powered machine with varying temperatures and lengths of time to draw out the rich flavor. During this process, the beans turn color from green to a dark brown or black, becoming softer and easier to grind. Once the beans are done roasting, Peterson cools them and stores them in large bins, where they remain fresh.

Peterson’s favorite part of owning a coffee roasting shop is the customer interaction. “In my desk job at Nationwide, I was kind of stuck in a cubicle all day, and I didn’t get to talk to people all that much,” he says. Now he is able to directly interact with customers and build relationships.

Peterson has received a lot of positive feedback from his customers, as well. “They love it,” he says. “It’s a very good cup of coffee. They are very pleased with it. They love that it’s fresh, and they love that it’s organic.” And while Corazon Coffee Roasters isn’t a sit-down coffee shop, you can buy freshly roasted beans, and Peterson can even make you a pour over cup while you chat.