The Tony Award is the most prestigious award you can win in the theatrical arts. Every actor, director, and choreographer dreams of taking home the golden statue. Many times, however, phenomenal theatrical work doesn’t make it to Broadway or goes unawarded at the Tonys, especially if you’re nominated the same year as Hamilton (better luck next time, Waitress!) Here are six musicals that have slipped under the radar and deserve more attention.

Revamps are huge in theatre, especially when a show is able to play off a favorite story from childhood. Billed as a modern retelling of the classic “Alice in Wonderland” story, Wonderland focuses on a woman living in NYC who discovers Wonderland through a broken elevator. Wonderland: A New Alice lived on Broadway at the Marquis Theater for a little less than a month: from April 17 to May 15, 2011, closing due to negative reviews. “The curse of the Marquis strikes again,” one Facebook fan commented. It may have been for the best, however. Although the soundtrack received rave reviews, “the book needs a major rewrite,” wrote John Fleming of the St. Petersburg Times. The musical boasts a twenty-one song soundtrack with true-to-story song titles such as “Mad Tea Party” and “Through the Looking Glass.” Loyal enthusiasts love the encompassing of a timeless story into one pop ballad after another. Listen to the album here.

There are few things funnier than melodramatic preteen angst. To get your fill, look no further than Jason Robert Brown’s 13, the musical credited with jumpstarting Ariana Grande’s career. Evan is a twelve-year-old Jewish boy who’s looking forward to his fast-approaching bar mitzvah, but he is stressed about the planning. He just moved to “The Lamest Place in the World,” also known as Appleton, Indiana, and he wants the popular kids to come to his party! Unfortunately, Evan’s first friend in Indiana is Patrice, a girl despised by all of the cool kids. Brown’s composing reaches an all-time comedic high as he attempts to empathize with preteens through hilarious slow jams and lyrics that are so relatable that they’re borderline eccentric. 13 was also reportedly the first musical to have an all-kid cast. The show ran on Broadway from October 2008 to January 2009 for a total of 105 performances, reaching fans who enjoyed the brash and outlandish characters, a concept that made the television show Glee so popular. Both the West End and Original Broadway Cast soundtracks are available on Spotify for your listening pleasure. 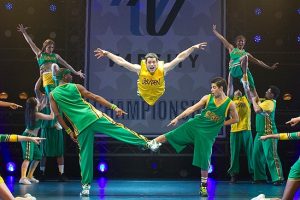 What do In theHeights, Hamilton, and Bring It On: The Musical all have in common? Lin-Manuel Miranda! Campbell is a senior cheerleader at Truman High School. Her biggest cheer dreams are coming true; she just made captain, and her squad is right on track to make it to nationals after winning the spirit stick at cheer camp. However, the school board redistricted Campbell’s neighborhood, which means she’s off to school at Jackson High, a school without a cheer squad! Lin-Manuel Miranda’s strengths are his ensemble numbers, and Bring it On plays to his strengths at least ten-fold. Standouts on the soundtrack include the opening “What I Was Born to Do,” a fast-paced number that introduces the main cheerleaders and establishes Campbell’s character as a confident and determined leader; “Do Your Own Thing,” a syncopated and dynamic track that introduces the both the audience and Campbell to Jackson High; and “Friday Night, Jackson,” a hip-hop infused ensemble piece that highlights Campbell finally getting acquainted to Jackson High, arguably the start of the rising action in the musical. “It’s such a funny musical that almost anyone will laugh at! The characters also have so much room for individualism which I love,” one fan raves. Bring it On was nominated for two Tonys in 2013 for Best Musical and Best Choreography. You can find many high school productions of Bring It On: the Musical on YouTube, but the Original Broadway Cast soundtrack is available on Spotify for streaming.

Natasha, Pierre, and the Great Comet of 1812, an “electropop opera” is based on War and Peace, written by Leo Tolstoy.  The show earned a season-high twelve Tony Award nominations earlier this year, winning Best Lighting Design of a Musical, Best Scenic Design of a Musical.  Widely acclaimed by fans, it came as a shock to the Broadway community when Great Comet faced a seemingly premature closing date, closing earlier this summer due to a financial bleed-out following a casting controversy. Former Hamilton breakout Okieriete Onaodowan, known for originating the roles of Hercules Mulligan/James Madison, was set to take over for Josh Groban (yes, THAT Josh Groban) in the role of Pierre for multiple months but was asked to step aside to make room for a white actor. The fans did not take that switcheroo well, punishing Great Comet in the box office, leading to its closing. Controversy aside, reviews spoke highly of the quality of the show, one fan calling Great Comet “a fantastic auditory and visual celebration.” Listen here.

If you like pie, catchy tunes, and strong women, then Waitress was made–or should I say baked–for you. Formulated by an all-female creative team and inspired by the Adrienne Shelly film and nominated for five Tonys in 2016, Waitress centers around Jenna, a waitress and an acclaimed pie baker. Jenna is in big need of an escape; her dreams are too big for her small town, and her marriage is on the rocks. We follow Jenna as she battles an unexpected pregnancy and an abusive relationship, finding comfort in pies and her co-workers’ loving advice, just trying to find a “Soft Place to Land.” Avid fans rave about the show’s ability to give them the giggles one minute but bring on the waterworks the next. Showcasing uncomfortable issues alongside a feel-good soundtrack (written by soft-pop queen Sara Bareilles) isn’t a new Broadway concept, but Waitress takes the concept and full-out sprints with it. The show reminds females everywhere that they truly do deserve happiness and should never settle, despite the possibility that society may disagree. Check out Waitress when it comes to Des Moines’ very own Civic Center as part of the Willis Broadway Series December 10-15.

There are two sides to every story, right? Meet Jamie and Cathy, the struggling couple everyone wants to root for but can’t.  Jason Robert Brown gives us a heart-wrenching musical about falling in and out of love, told almost exclusively in song from start-to-finish by Jamie and finish-to-start by Cathy. The show opens, and the audience sees Cathy, a struggling actress, reading and reacting to a letter from Jamie; he’s left her for better, but obviously, she’s not fine; she’s “Still Hurting.” A mere five minutes later, we see Jamie, a successful author, is giddy with newfound love for Cathy as he belts “Shiksa Goddess.” Every marriage has its flaws–lack of trust, selfishness, and sometimes adultery. The Last Five Years reminds us that relationships have a breaking point; you can’t just gloss over every problem like they don’t exist. The split-narrative style of storytelling highlights both individual’s flaws–selfishness, adultery, self-doubt, paranoia–and gives the audience the chance to choose whether they’re Team Jamie or Team Cathy.  Never making it to Broadway, The Last Five Years has the tendency to fall between the cracks, but it deserves loads of praise for its unique storytelling device and its raw, soul-crushing ballads, songs that pick apart every emotion and uncertainty that comes along with being in love. Watch the movie adaptation on Netflix, starring Pitch Perfect darling Anna Kendrick as Cathy and Newsies’ Jeremy Jordan as Jamie.

Just because a musical doesn’t receive national acclaim doesn’t mean it’s unworthy of attention, and the above shows are perfect examples of that. Hopefully, one soundtrack or recorded performance will encourage you to look deeper into everything that the world of musical theater has to offer.

Getting a tattoo is a big commitment, and there are many things to consider beforehand. Here are some things to think about before picking…