With the holidays upon us, take a traditional approach to photography to preserve those special memories.

Film photography is back. What once faded into the background as digital cameras became mainstream is now growing in popularity. Analog cameras are finally leaving their place on thrift store shelves and being dug out of family storage closets. And, with accessibility provided by the internet, developing supplies are relatively easy to get–for those willing to DIY. Currently, the Paterson Universal film tank (a nifty contraption used for at-home developing) is one of B&H Photo Video’s top-selling online items. In addition to this popular photography store, sites like Amazon also provide developing equipment, film, and used analog cameras.

While many developing options exist, some people are choosing to develop their own film. And maybe surprising, like the equipment, it’s pretty easy to get a hold of (after doing it a time or two). For those willing to take a chance, as well as invest a little into their film hobby, here is an easy way to get started developing color film. 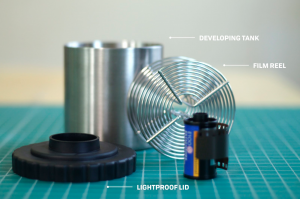 Pictured: Omega film tank with lid and reel. For this set, simply turn the tank back and forth gently instead of using an agitation stick.

Setting up the tank

Missouri-based Nicole Leth is turning heartbreak into a clothing line.